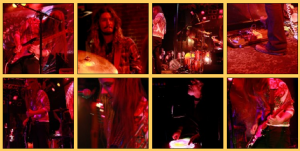 After Green & Wood, Radio Moscow took the stage, almost unrecognizable from just three weeks ago when singer/songwriter, guitarist, and band leader Parker Griggs parted ways with the other two-thirds of his power trio and flew in bassist Billy Ellsworth and drummer Lonnie Blanton to support him on this tour and potentially beyond.

Thrown to the wolves by the band’s frontman, the two newbies immediately demonstrated their worthiness on set opener Broke Down, off the 2009 albumBrain Cycles. Blanton’s thunderous work on his minimalist kit and Ellsworth’s rolling, muddy bass provided the ideal backdrop for Griggs’ inspired throwback guitar work.

Radio Moscow continued their roll on Speedfreak and Creepin, both off 2011’sThe Great Escape of Leslie Magnafuzz, with Griggs and company sounding like they’d been together all along. During “Speedfreak”’s calamitous ending, all three band members were lost in their own instruments, but somehow producing a singular vision of modern blues metal. They seemlessly moved into “Creepin’,” locked in a blues groove with Griggs working his best bluesman growl before diving into another mind-bending solo.

After tearing through another Brain Cycles track, The Escape, they returned withLucky Dutch, off their 2007 Dan Auerbach-produced self-titled debut. The song’s ripping groove and Grigg’s guitar god licks drew the evening biggest response, with the crowd roaring its approval.

Returning to Magnafuzz, Griggs launched into the instrumental anthemDensaflorativa. Ellsworth dropped his bass and broke out maracas and a conga, giving the song its distinct Stones-in-Morocco feel. The furious “Little Eyes” followed, with Griggs’ muddy, blues riffs underpinning his snarling lamentation that he “just can’t find no reason to believe.”

Radio Moscow closed out their set with 250 Miles, a deep blues jam off of Brain Cycles, taking the song on a more-than-seven minute journey that showed the band’s range. Starting with a attitude-filled Delta blues groove, Griggs, Ellsworth, and Blanton exploded into a total psychedelic freakout, extending the show-closing jam for more than seven minutes as the audience roared their approval. [READ MORE]