Jan
Up On The Sun Interview

Unapologetically catering to dood rockers, Alive launched The Black Keys, and has continued pumping out slabs of wax from psych, garage, blues, and power pop bands (Dan Auerbach of ‘the Keys still shows up to man the producer chair for many of the label’s releases). The labels latest compilation, Where is Parker Griggs? features 14 cuts, ranging from the gospel leaning “Everything that You Took” by Lee Bains and The Glory Fires to brisk pop like “Love Me Baby” from Latino rockers Hacienda. But perhaps the most “out there track” on the record is the opener, “Open Your Eyes,” by Radio Moscow, fronted by the titular Griggs. With its screaming fuzz, echo, and backward tape masking, the song illustrates both the boot scooting Midwest feel of the band’s Iowan roots and the far out, acid washed sounds of Northern California, where the band recorded its latest opus, The Great Escape of Leslie Magnafuzz.

Griggs and I discussed the latest record, the curious remarks of showgoers, and who exactly this “Leslie Magnafuzz” is.   [READ MORE]

Radio Moscow is scheduled to perform Graveyard, Destruction Unit, and more on Friday, January 27, at the Yucca Tap Room in Tempe. 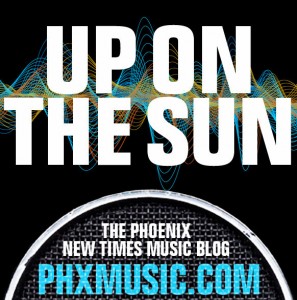 Up On The Sun

Sun/Jan-29 Santa Cruz CA The Catalyst
(NOTE: Graveyard is not on the Santa Cruz show)

Only a week and a half remaining of the US tour with Radio Moscow & Graveyard Live music review: Parker Griggs’ new Radio Moscow lineup rocked The Mohawk.